Hackagong 2013 was held last weekend – over 100 people in more than 30 teams spent the weekend coming up with new products from scratch.

I teamed up once again with Rhys Powell (a super slick young web/iOS dev) and we managed to pump out a really polished final product by the end of the weekend. We created Whispr: a web app that allows private, disposable chat without accounts, and without the need for a native app. 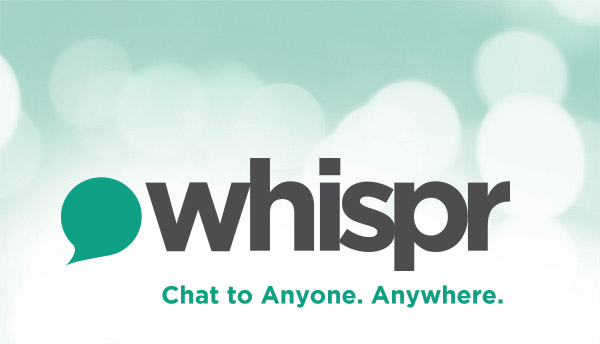 Our intention going into the weekend – was that we wanted to create something that solved a single problem simply and elegantly (much in the way RedPen.io does) – and then give it a lot of polish (both in terms of visuals, and interaction). We wanted anyone to be able to use it – regardless of their prior skill or expertise.

At the same time my teamate (Rhys) had been playing around with the Meteor JS framework – and was keen to try out its asynchronous capabilities. It was out of these two factors we decided to create a chat app that anyone could use – without setting up an account, or having a particular application.

Here’s how it works:
A user arrives at the homepage (we were able to launch a full responsive landing page within the time limit) to see what the fuss is all about. 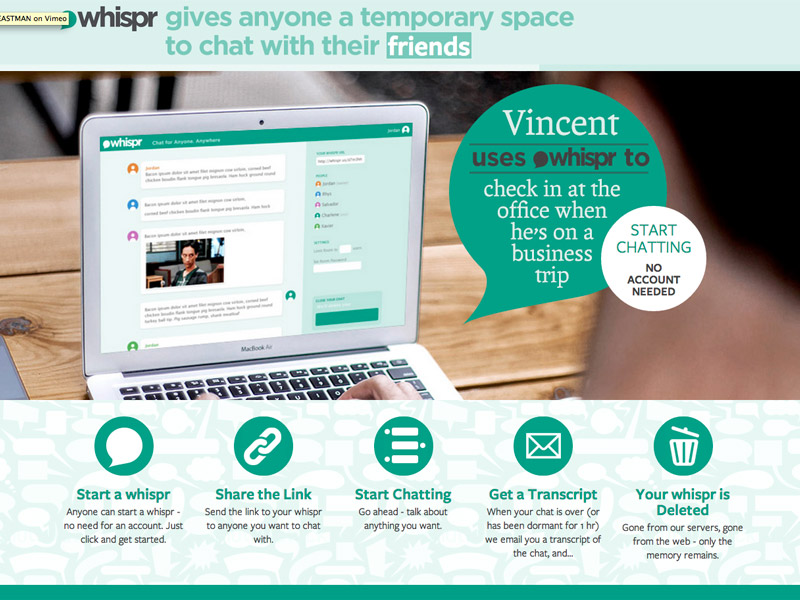 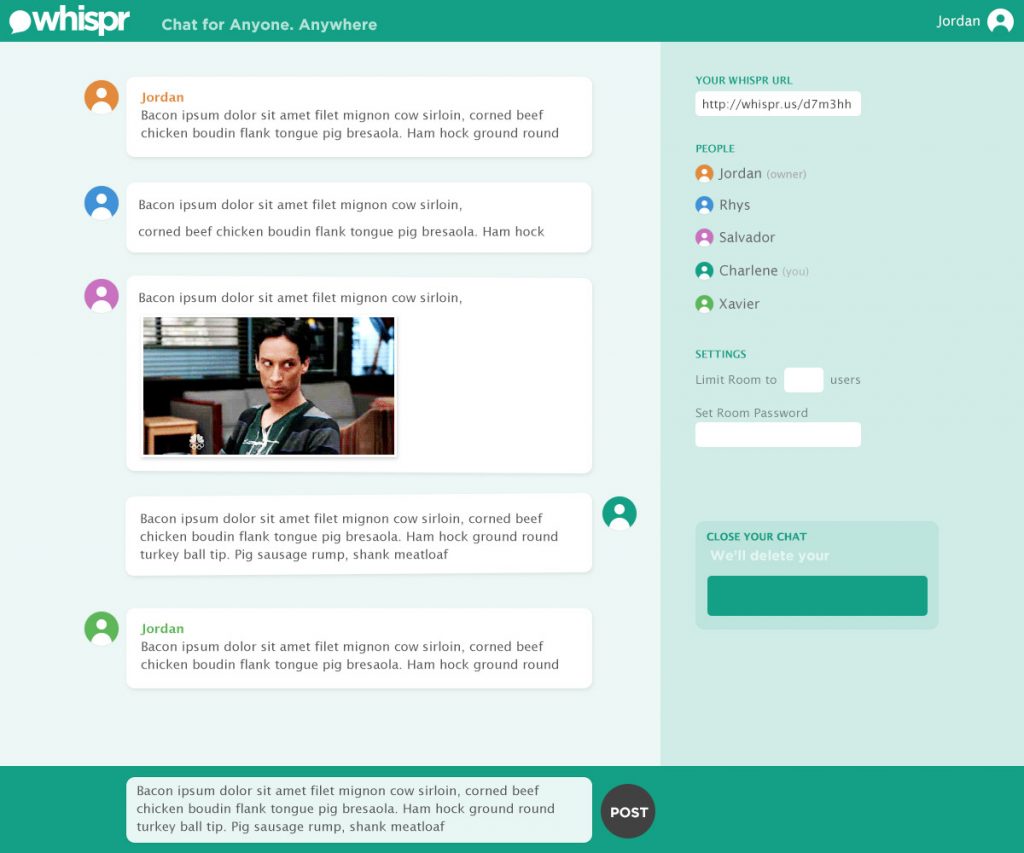 Once the chat is dormant for an hour – the chat is deleted from the server, and the chat’s creator recieves an email transcript of the whole chat (hence the email address at the first step.

By the end of the weekend we were able to have a fully functioning (and styled) prototype up and running on desktop browsers and tablets, along with a fully responsive landing page. We were super happy with our efforts.

The judges, spectators, and even our competitors all loved Whispr. It was a great thrill getting to demo the service – running entirely remotely – to the people that came past. At the end of the weekend we were stoked to be included in the top 10. This meant pitching to the judges at a separate event last Wednesday.

Pitching was a great thrill – a new experience for me – and we both felt it went well. Our slides were well put together, and we were confident talking about a product we were both quite excited about.

We were in awe, however, of some of the concepts the rest of the top 10 had created over the weekend – and in the end the prize was taken out by a more than worthy pitch – by Peerio (go check them out – good stuff).

Whilst we had a great time developing Whispr – there are a number of factors that mean we won’t be pursuing it further as a product in its own right. Part of that comes down to our current work situations and some to some hairy questions around the use of a product that allows essentially anonymous chat.

What we ARE doing, however, is releasing the engine as Open Source. In fact a refactored, rebuilt version is already released for you to check out on GitHub (massive thanks to Rhys for getting that sorted).

Something like Hackagong can be really intense – you’re in the thick of it for a whole weekend. So it is interesting to take a step back and see what lessons I’ve learnt from this particular experience.

Limit your Scope
One of the reasons we were able to put out such a polished finished product is that we were deliberate in limiting the scope of the product. From the outset we kept in mind that we wanted to attempt something that would be achievable and be able to be finished – rather than bite off more than we could chew.

This meant every question was looked at through a lens of checking if it fit with our original scope – or if it was something additional. This was hard to stick to – but in the end it paid off.

Collaborating on Development is Hard
One of the struggles with the weekend was the inability for me to touch the codebase. We decided early that trying to get a meteor dev server running on my machine would be too time consuming (plus I’d have to learn it) so I worked in Photoshop, and created static HTML/CSS documents which were then ported into the application.

This worked really smoothly up to a point, and kept a nice demarkation of work. Where this fell apart, however, was towards the end – when there were little HTML tweaks I wanted to make (updating wording, tweaking padding) but couldn’t – as I was totally removed from the development. A problem to figure out for next year.

Pitching is Hard
My first experience of pitching was really great – but I feel enlightened as to how hard it is. To distill the concept of your product, how it is used, and how it will make money, into a couple of minutes is no mean feat – and something I’d love to greatly improve upon in the future.

Brand/Design Matters
I believe very strongly that a large amount of the reason why we made top 10, and people liked the product, was due to the design and branding. Under the hood, our concept was a relatively simple one – let people chat. But the fact we were able to spend time coming up with a polished brand, and a nicely design product (and promotional site) really pushed us to the top of the pile.

I think for startups – the value of design cannot be overstated.

So that was Hackagong – a great weekend. Lots of fun, and a great deal of learning. If you ever have the opportunity to go along to something similar (Hackathons are run all over the world) I highly recommend it.